Professor Naoyuki Yoshino of the Faculty of Economics at Keio University has received an honorary doctorate (Doctor Rerum Politicarum Honoris Causa) from Martin Luther University Halle-Wittenberg (Germany).
The award was primarily given in recognition of his outstanding research record, represented by over 200 published works, which has focussed on providing empirically-based solutions to real economic issues that are relevant to Europe as well as to Asia. In particular, he has shown how adjustments to fiscal policy can allow governments to avoid the explosive growth of budget deficits. For example, his work on the role of fiscal investment-loan programs in Japan including the concept of hometown investment trust funds has influenced the growth strategy of the present government under Prime Minister Shinzo Abe.  In a paper published by the IMF, he has also made proposals for reform of the Basel Capital Adequacy Requirement so that greater flexibility can be shown in dealing with individual countries.
The award also recognizes his many valuable achievements in the field of education. In particular, through his lectures at Halle University since 2009 and his annual intensive lectures for students in the double degree program, between Halle University and Keio’s Graduate School of Letters and Graduate School of Media and Governance, he has played a significant role in developing students’ understanding of economic policy.
The award ceremony was held on 22 November 2013.  The President, Vice President and Dean of Halle University made

speeches, and a minister from the Japanese Embassy to Germany delivered a congratulatory address. 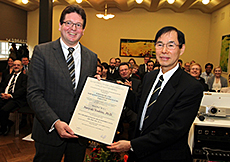 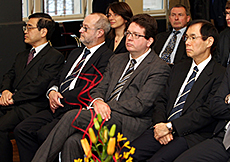